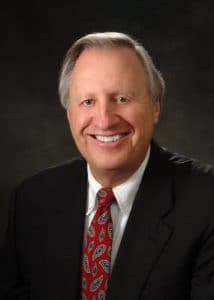 Dr. Miller is a graduate of Davidson College and a Merit Graduate of the Medical College of Virginia School of Dentistry. He did his specialty training in periodontics at the University of Alabama. He is a member of Omicron Kappa Upsilom, a Fellow of the International College of Dentists, and a Fellow of the American College of Dentists. He currently holds visiting faculty appointments at five dental schools and serves as a clinical professor at the Medical University of South Carolina.

Dr. Miller introduced the concept of periodontal plastic surgery to periodontics. He was first to present the free soft tissue autograft (free gingival graft) as a predictable procedure for obtaining root coverage and introduced a new classification of recession to the literature. He founded the Periodontal Plastic Surgery Study Club.

He has published 28 scientific papers, contributed to 4 textbooks, and has lectured to over 250 dental societies both nationally and internationally. In l989 he was a participant in the World Workshop in Periodontics and served as Secretary of the Section on Mucogingival Surgery at the World Workshop in l996.

In 1993 he was named the Outstanding Dental Alumnus of his alma mater, the Medical College of Virginia. In 1999 he received the Master Clinician Award from the American Academy of Periodontology. In 2003 he was voted the Tennessee Dentist of the Year. In 2008 he received the Outstanding (Overall) Alumnus of the Medical College of Virginia and the Presidential Award from the Southern Academy of Periodontology.

He has served as President of four major dental organizations including:

James R. Ross, DDS, MS, FACC, FICC is a Co-founder of Periodontal Associates of Memphis. He attended Dental School at the University of Tennessee College of Dentistry and received a Master’s Degree in Periodontology from Ohio State University.

He is certified by the American Board of Periodontology and was awarded the Fellowship Award of the Tennessee Dental Association. He is also a member of the Dean’s Society and OKU and has contributed several original articles and chapters in professional text books relating to Periodontology. Dr. Ross was one of the early practitioners of acceptable dental implants and has lectured extensively on the subject.

Dr. and Mrs. Ross have traveled extensively, visiting 102 countries and all seven continents. Retiring in 1999 to his farm, Richglen, Dr. Ross was elected to Leadership Collierville, his hometown. He has written two novels, The Last Reunion and The Snake’s Hand.