A link has been identified between individuals suffering from diabetes and

oral inflammatory diseases such as periodontal disease; a recent study conducted in Canada suggests that there is an interaction between the two conditions.

This finding could lead to dental offices and healthcare professionals working in unison to ensure that diabetics get the appropriate treatments. Researchers have found that as many as two thirds of all diabetics have periodontitis and gingivitis.

This really comes as no surprise to many dentists who have come to note that long term diabetes which has gone uncontrolled eventually leads to severe periodontal issues.

If the diabetic is treated and the periodontal disease is also addressed, the diabetic’s condition improves. These findings suggest that diabetics require regular dental treatments and if periodontal issues are identified they need to be treated with immediacy. The health of the diabetic and the oral health of the individual are tied together; addressing one’s oral health is as important as getting regular checkups and monitoring glucose levels.

How Does Diabetes Affect Your Oral Health?

When you hear the word ozone, the first thing that[...] 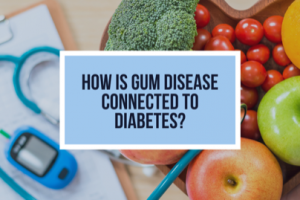 How Is Gum Disease Connected to Diabetes?

In a recent article, we touched briefly on the connections[...]